On Sunday after I finished my Picasso inspired mixed media piece, I still wanted to play. Last week I printed out a picture of Sean Penn’s character, Jeff Spicoli, from the movie “Fast Times at Ridgemont High”. He was my favorite character when the movie first came out, because back then, I was a stoner, too! Yep, I spent 10 years of my life partying until I got burnt out on it at the age of 27. True confession. But hey, some of us have a sordid past.

Moving right along, I find sculpture to be as difficult as oil painting, but more fun! And obviously, this does not really resemble Sean Penn or his character! But after I finished it, I grabbed some old wrapping paper (that actually represents the 1970s), but I like the colors, and it kind of reminded me of the poncho he wears in the movie. So I set it in front of some construction paper and took a picture!

I just love being spontaneous and creative. It sure is healthier than some of the stuff I used to do!

Have a wonderful day! 🙂

Yesterday I spontaneously grabbed a 10 x 20″ canvas that I had painted a brownish beige in oils a few days ago. Then I got out my pastels, soft ones and oil pastels, picked out just a few colors, and began drawing lines and shapes.

First I used a black oil pastel and a soft chalky white one. Then I drew in the upper left corner with my orange oil pastel. After that I just started drawing various other body parts and began playing with the colors. Keeping the colors to a minimum and working on balancing them was fun!

Lastly, I used a paintbrush to swipe on some Hansa Yellow acrylic paint. Then I mixed some Pyrole red into the yellow and finished the painting with splashes  of orange.

I had no specific plan or image in mind when I began which was why it was so fun! I just felt inspired by Picasso after doing some reading about him, so I just followed my nose.

Have a wonderful day! 🙂

Oil Painting – My First One 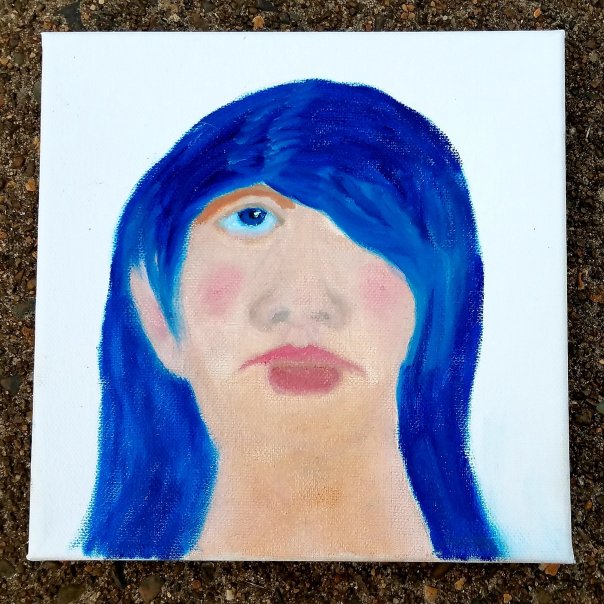 Last week I went to town to run some errands. I haven’t been to town in quite awhile so I decided to pop into Michael’s since they aren’t as crowded these days.

I had been researching oil paints online for a couple of weeks and wanted to see if they had either of the sets I had been looking at. They did, and I opted for the Winsor & Newton Winton Oil Colors. It came with several small tubes of some basic colors and a larger tube of white. However, there was no black in it which is one of the colors someone suggested I  get as a beginner. The set also came with two brushes and a bottle of a substance that can thin the paints out some.

Well, artists are not kidding when they say oil paints take a long time to dry! I painted this face from my imagination on Thursday. It is a small 8×8″ canvas. I didn’t use the thinner, but I also didn’t lay the paint on thickly. Yet it still isn’t dry. I suppose that can be a good thing if I were to want to change or fix anything.

I honestly did not like the feel of these paints. However, I know that this set I purchased is also a low-grade oil paint. I would hope the more expensive brands are much better. I watched a short YouTube video of an artist who explained what brands are best and why. The lower-grade paints have less pigment, less oil and more filler than the highest-grade paints which are made up of only oil and pigment, about half and half!

One positive thing is that the paints themselves are not fumey like I expected them to be. I learned that it is the solvents and other things artists mix with them that produce the fumes. I bought a mineral oil to clean the brushes, but I found that even soap and water works for these paints.

Anyway, I will most likely play around with them on some textured paper i have instead of using up my canvases. In fact, I may paint over this one, ha ha!

Have a wonderful day! 😀

An Elf and His Eagle

Today I decided to do something a little different. I used my oil pastels to draw this elf boy and his spirit animal, the Golden Eagle.

This is not this week’s portrait for my class. In fact, I think this week there is going to be another one done on the iPad with Lisa Filion. So I may do her photo in watercolors again since I don’t have an iPad. I haven’t seen the lesson yet.

Pastel of a Secretary Bird

Today I decided to do something I have been intending to do for a long time…draw (or paint) a Secretary Bird! They are funny looking for sure, especially in this pose!

An aquaintence on Facebook did just the face of one which is wild looking depicting the crazy week she had! So I told her I have been wanting to do one for awhile now. So she encouraged me saying she can’t wait to see mine.

I love how artists who have never met in person can become friends with others all over the world and share our art and inspire each other! It’s so fun!

Here is another pastel I have been working on. This is my rendition of a pastel Degas did on tracing paper called “Woman seen from behind, drying her hair.”

It was a challenge trying to get the layers of colors the way I wanted them.

Pastel Rendition of a Degas

I played around with my soft and oil pastels last week. I did this one early last week which is called “Group of Dancers” by Edgar Degas. In some of his pastels, his images are almost ghostly looking. Some of them have blurred line work which I love.

I will be posting another I drew of a different pastel he did later this week. I am still drawing left-handed and will be for quite some time. I started physical therapy this week and will go twice a week for a couple of months, then increase to three times a week later on.

This is my rendition of a Degas which he originally drew in pastel and charcoal on tracing paper. It is called “Russian Dancer.”

However, this morning I drew mine in my sketchbook with black pen, soft pastels, and oil pastels. It was quite fun!

I am going on three weeks of recovery from my shoulder surgery. I am doing well. We had another power outage this week, but fortunately, it was only for about 30 hours. I hope everyone has had a great week. 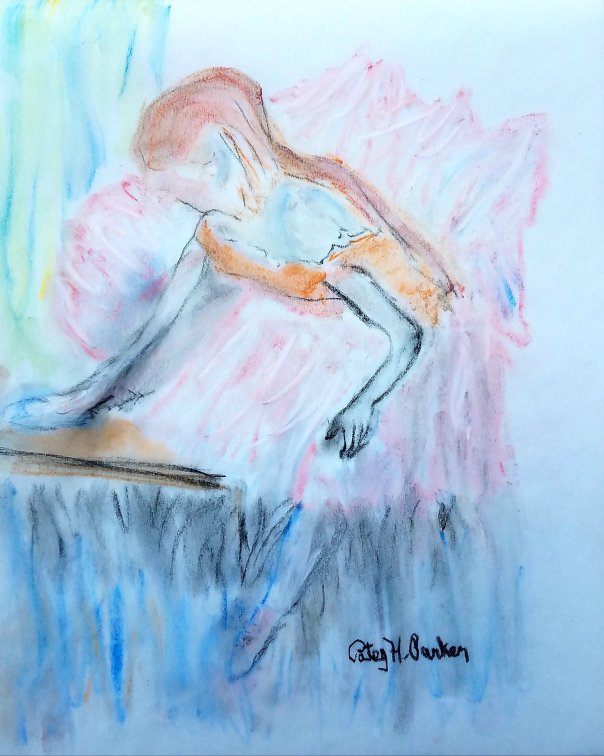 This is my rendition of Edgar Degas’s “Pink Dancer” which he did with pastels on paper. However, I did mine with my soft chalky pastels on tracing paper. He used this technique often in his studio when he worked on drawings.

I found it interesting and challenging. I often had to blow the excess pastels off of the paper to see the image so I could keep drawing,  but it was fun. I used my fingers to smooth some places, too

My drawing has a lot more blue in it than his but I like the way it glows.

I drew this ballerina with my soft pastels the other night. I used a gray pastel paper just to see how these colors would show up. I didn’t draw her right leg correctly, but for some reason I just couldn’t manage to shape it right! I also couldn’t get her arms to show up as much as I wanted to.

I felt frustrated with how chalky these soft pastels are! I am not sure I like them much. Oil pastels are easier to draw with for me, but I will practice some more with the soft ones. I may try using them with charcoal. I don’t feel a great need to “master” the medium of pastels, but these were given to me from a friend, so I had to try them out. (She doesn’t care for pastels at all, so I know she will understand!) 😉