Here is the first painting I did on Thursday using the drawings I had done. I was trying to put her in four positions to look as if she is twirling. However, I didn’t think of it until later that I should have put a tutu on her like I thought to do on the Gothic ballerinas! Oh well. Also, I really dislike the color of blue I chose for the background. I forgot that this color of blue called “Prussian Blue” is very staining, so it is just about impossible to lift out once it is laid on the paper! UGH! Anyway, I became so frustrated with it that I threw it in the garbage! (I fished it back out, though, because I have used it mixed with other blues for some cool looking waters in the past.) It just wasn’t a good choice for this. I even tested it out watered down a lot on a piece of scrap paper before I used it, but it just still wasn’t what I really wanted.

So….this is why I opted to paint her outfit in orange which is the complement of blue, so I do like that aspect of the painting. I am just chalking this up to a great learning experience! 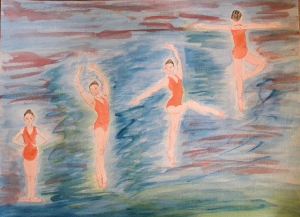 Close-ups of the rest: 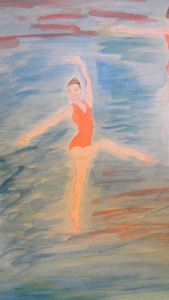 When I began this blog I was simply going to share my writing. However, after being part of the blogging world for quite some time now, I decided to begin sharing my artwork. Patsy's Creative Corner will always have my artwork. Thanks for visiting! :)
View all posts by whitefeatherfloating »