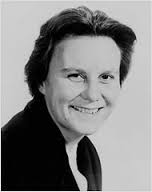 Nelle Harper Lee was born on April 28, 1926, to Amasa Coleman Lee and Francis Cunningham Finch Lee, in Monroeville, Alabama. Her parents married in 1910 and settled in Monroeville in 1924. Nelle had three older siblings: Louise, Edwin, and Alice. Her sister Louise married and had a family. Her brother Edwin died at the age of 30 from a brain hemorrhage. Alice, the eldest, became a lawyer like her father and worked with him at his firm all her life. Nelle was in law school until she decided that being a lawyer was not for her. She wanted to write books.

In 1949, much to her parents’ dismay, she decided to move to New York City. She was 23 years old. The first job she found there was in a bookstore. “A bookstore was barely within the orbit of the literary world, but at least she would meet writers there. Or so she thought.” (1) Eventually Nelle discovered that her job didn’t pay enough. It barely covered her rent and food. In 1950 she went to work for Eastern Airlines. Her job required that she join the union which improved her salary substantially.

While she worked for the airlines, she spent her evenings writing and occasionally socializing with her good friend, Truman Capote, whom she had known since childhood. He had been left in Alabama when he was a small child by his mother for some time to be raised by his aunts. He lived next door to Nelle for several years. Eventually, he was picked up by his mother and moved to New York. When they were young, Nelle and Truman became fast friends, much like the characters Dill and Scout did in To Kill a Mockingbird. However, contrary to popular belief that she based her character, Dill, on Truman Capote, Nelle says this about the characters in her book in an interview she did in 1963 for a Chicago Press reporter:

REPORTER: “Were the characters in the book based on real people?”

MISS LEE: “No, but the people at home think so. The beauty of it, though, is that no two people come up with the same identification. They never think of themselves as being portrayed in the book. They try to identify others whom they know as characters.”

You can read the full interview here: http://web.archive.org/web/20070701015703/http://www.chebucto.ns.ca/culture/HarperLee/ellison.html

Nelle was a tomboy as a child. She was known as “a fearsome stomach-puncher, foot-stomper and hair-puller…” (2) Similarly her character Scout says in chapter three, “Catching Walter Cunningham in the shcoolyard gave me some pleasure, but when I was rubbing his nose in the dirt, Jem came by and told me to stop.” (3) Charles J. Shields says about Nelle Harper Lee in his biography, Mockingbird, “Once, three boys tried to challenge her, charging her individually, like kinghts galloping toward her. Each ended up facedown, spitting gravel, and crying, ‘Uncle!’ within moments.” (4)

Nelle was never a “girly” girl. She didn’t like to dress up when she was young. In her younger years she wore mostly pants and casual shirts and sometimes skirt outfits. Her hair is usually in a short wash-and-go style, and she’s not known for wearing make-up.

In college, she enjoyed athletics and was often seen hanging out with groups of boys. Many people there thought she came across more masculine than feminine. Cussing and smoking were two of her trademarks. I don’t know if they still are. She was not part of any specific group of girls. More often than not, she was seen as a loner, spending more time in her dorm room and the library than out socializing or dating. However, this was how she preferred to spend a great deal of her time – alone – reading, studying, and writing.

Yet, in her hometown in Alabama, contrary to her reputation, she has not been known as a “recluse.” Her closest friends have helped protect her from being bombarded by fans of her book through the years, because she enjoys her privacy. However, she has always been friendly and sensitive to others’ needs. She never seemed to be bothered about trying to “fit in”; she did her own thing, which obviously has made her happy.

These things I have mentioned about Nelle Harper Lee – her tomboyish ways, her sensitivity, and her love for reading and writing – are things that have always been pointed out about me from others throughout my own life. Growing up in the South in the 1960s as I did, I had the impression that these qualities were sometimes looked down on by other girls and some women I knew who saw themselves as more “proper.” As a child I thought that women were supposed to be more concerned about learning to cook and sew (both of which I hated) than writing stories or having your nose in a book like I did. I have always thought of myself as a tomboy.

All of my life I have never been one who liked wearing dresses. I hated it when I was a kid and my mother put rollers in my hair, to give me curls that never felt natural, for special occasions like my piano recitals or choir performances at school. I loved playing outside all the time, and I liked playing ball and riding bikes with boys much more than playing dolls or dress-up with girls. I enjoyed being a tomboy, because it was how I felt most comfortable. I liked getting dirty! I haven’t changed! Even now when I have to dress decent to make all my trips to town, as soon as I get home, I take off my shoes, get into my sweats, and breathe in the comfort of home.

Most likely I will never meet Nelle Harper Lee, but I feel like she and Scout have become “kindred spirits” to me. I have enjoyed reading her one great novel and learning about her very much! I have also enjoyed reading the biography Mockingbird, A Portrait of Harper Lee by Charles J. Shields as well. I have found Harper Lee to be a wise and wonderful treasure of a woman.

Until next time, y’all come back now, ya hear? Can’t you hear that wonderful southern accent?

Have a wonderful day, and give someone you love a big hug! 🙂

Visions of a People's Dharma

There is an artist in each of us