Question #12 – What was an experience that left you speechless with delight? 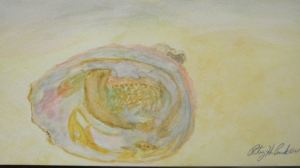 I painted this abalone shell in 2005 in watercolors!

Back in the early 80’s I went abalone diving once. I wish I had gone several times after that, but for some reason I didn’t. My husband at that time taught me everything about diving, because he had been doing it for years. We went with his family every Memorial Day and Labor Day weekend to the coast just for abalone diving.

I rented a pink wet suit which probably scared the fish! I had to learn how to use a snorkel a few weeks in advance. So on the day we did the diving, I was equipped with my suit, snorkel, mask, gloves, and crowbar to pry the abalone off the rocks. I had been told that would be the hardest part. But I wasn’t worried about holding my breath a long time; I was in excellent shape then and have always been a strong swimmer.

The hardest part of the day was getting down to the shore from the cliff we camped on. The hill we went down and then had to climb back up after diving was nicknamed “Cardiac Hill.” It was twisty and very steep, so the name fit! What I hoped for when I went that day was clear water, not cloudy which makes it harder to see. Not only was the water the clearest we had ever seen it, but the weather was perfect that day! I was greatly blessed with the perfect day for diving.

I felt really nervous, but I just prayed for strength to be able to find some abalone and be able to pry them off the rocks! The limit for each person was four abalone.

Once I was in the water, I took a few deep breaths, put my snorkel and mask on, and plunged down as far as I could go. The DELIGHT came when I saw the fish and sea life swimming all around me and the colorful plants, etc. I LOVED IT!!! Tim showed me where to go and look for them, because he was diving with me. He helped me find my first one, but I pried it off the rock by myself. It was a lot harder than I thought it would be! But I did it!! I had my first abalone which I think we put in some net or something until we went back to the surface.

I took several more dives and got two more! Then his uncle got one and dropped it down from the surface for me to get. I didn’t know that at the time; I thought it was just swimming around. Silly me. But I was so tired by then, that I was thrilled to have gotten my four abalone. 🙂

That is one of my greatest memories out of all of my ocean trips, except of course being with my husband and two kids a couple of years ago at Crescent City! Maybe I’ll get to try diving again someday after my husband, George, retires! 😉

Posted on May 23, 2014, in Art Talk and tagged art, drawing, The Successful Artist's Career Guide. Bookmark the permalink. Leave a comment.