SELF-PROMOTION – What a struggle!!

My Facebook page for my artwork is slowly growing. For that I am thankful, but I really don’t know how to get myself out there any more than I already have, you know?

So the other day I made some calls to a few local businesses, and I obtained permission to place my business cards in two of them. But there was one place I was going to try to actually put my printed cards out to try and sell them until I found out they want a 60% commission. So yeah, I charge $5 for a card, and based on what I pay to get them printed, it wouldn’t be worth it to me. I know I could be getting my artwork out there in the community at that store, though, IF people bought them. But they had many other artists’ cards there for sale that were priced a lot cheaper. But I don’t know if they are selling.

Perhaps the objective shouldn’t be to make money, but hey, I am trying to do that slowly. I just need to remember that doing the artwork is what I love most. I really hate trying to sell mySELF. That’s ironic, though, because I used to be in sales when I worked at a newspaper. The last job I had there was selling classified ads. The best part about the job was that I was making the same amount working part-time that I had been making full-time in another department. I worked hard and made my commission every month, but sometimes I didn’t feel good about trying to sell longer running ads to older people who were probably on a fixed income or younger women who were probably mothers struggling to make ends meet. I only did that job for a year before I finally quit the company after eight years. I was burned out on sales!! So you can see why this is a struggle for me. Here’s a computer drawing of how I feel right now. (This is why I draw on paper, by the way.) 🙂 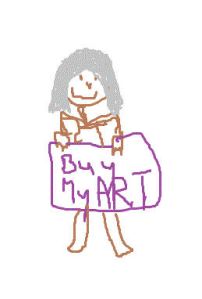 On the other hand, I have had a little bit of promise from some local places that will hopefully be looking at my work soon to see if it fits their needs. The local library displays things about local people, and I believe they have an art gallery. The lady who handles it is out of town now, but said she will get back to me when she returns. I know they are very community-oriented, so I hope I get an opportunity to get some exposure there.

And in a few months, I will be getting the opportunity to hang some work in a local business that hasn’t opened yet. So that is still out there if everything goes well for their opening that is planned for sometime in May or June.

As of right now, I just need to keep making art. I painted my huge sea turtle yesterday, but it didn’t really come out like I hoped it might, so I was a little disappointed. I wasn’t in a great mood when I began painting, and I think that had a lot to do with how I responded to it. But of course my husband and daughter love it. I plan to try and finish it today. So maybe later, you can see it!

In the meantime, have a wonderful day, and give someone you love a big hug! 🙂